Diet and exercise are the hallmarks of a thin, trim body, but all too often, these healthy lifestyle habits aren’t enough to budge stubborn fat or build muscle. Most of us have trouble spots, areas where unwanted fat likes to congregate, and once the fat is there, losing it and toning up again can feel impossible.

If you’ve tried diet and exercise, but aren’t seeing the results you desire, come see Dr. Scott Farber. We offer CoolSculpting, a revolutionary, non-invasive, and non-surgical treatment for stubborn fat. You’ve put in the effort; CoolSculpting will help you get the results.

Learn more about your options for body contouring in Boca Raton and Palm Beach, FL, with a CoolSculpting consultation at Farber Plastic Surgery. Call our office at 561-503-2700 to learn more.

Diet and exercise provide whole-body results. As you cut calories, fat cells across the body shrink as you lose weight. When you go on a diet, you can’t target specific areas for fat loss.

While diet and exercise shrink fat cells, CoolSculpting works by destroying them. Fat doesn’t like cold. When your fat cells are exposed to frigid temperatures, they break down and are destroyed. CoolSculpting uses specialized cooling technology to target and freeze unwanted fat. This treatment allows us to pinpoint treatment areas, focusing your fat loss on the areas where you want to lose fat.

After treatment, the body will remove the treated fat cells through natural elimination processes. These fat cells are permanently destroyed. Since the total number of fat cells remains stable in an adult body, these fat cells won’t return. CoolSculpting provides long-lasting fat reduction in targeted areas on the body. It is an ideal solution for your trouble spots. 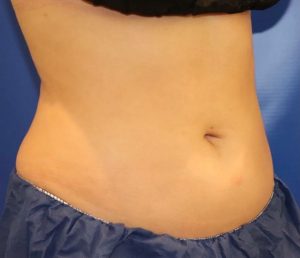 “Growing-up, I always had insecurities (about) my weight and always knew I needed to work-out really hard. As a 25 year old woman, I still have issues with my weight and still go to the gym and workout hard. I first heard of Coolsculpting a couple years ago in different Medspas. Once the opportunity was presented to me at Farber Plastic Surgery, I was so excited to actually try it and put it to the test. Coolsculpting is a non-surgical procedure that will freeze fat cells. During my consultation with Dr. Farber, I was able to discuss my problematic areas (which was my abdomen) and to be sure that I was a good candidate…

“What is to be expected from Coolsculpting would be some tenderness. It was also explained to me that over the next 3 months your body naturally loses those dead cells and they don’t ever come back. Secondly, he made it clear that it would need to be pinchable fat so therefore, the machine would be able to suction it. After my consult, I decided to move forward and put it to the test! My first day of treatment I was super nervous.They used different colored sharpies to mark up my stomach and to know exactly where to target the “stubborn Fat” and where to place the Coolsculpting Machine. Once I laid down to begin my treatment there is a pre- treatment wipe and a gel pad to prevent frostbite. Next came the Coolsculpting Machine. As I laid there, I began to feel the Cold began to feel slightly uncomfortable and once it became really cold you felt numb and slowly began to ease.

Each applicator takes 35 minutes.  So imagine I had a total of 6 different areas to treat. My abdomen took about 3 hours.The best part yet is you have distractions. I was set up with Netflix, my phone and lunch. When I was finished with my treatment, my stomach was swollen and felt tenderness which I was told I would experience for a couple days. After a couple weeks passed, my stomach no longer felt sore. The swelling went down and started to see a result. After noticing such a difference in my first treatment I began my second treatment. My second treatment was such a success, I was so obsessed with Coolsculpting. I would recommend this to anyone who’s thinking about Coolsculpting and 100 percent do this again.

THE BENEFITS OF COOLSCULPTING

Tighten, slim, and tone with the power of technology. CoolSculpting offers many benefits over traditional weight loss and surgical body contouring procedures like liposuction. These benefits include:

Learn about the many benefits you’ll experience from CoolSculpting in Boca Raton, FL, during your consultation with Dr. Farber.

Dr. Scott Farber is a fourth-generation physician, and practices as an aesthetic surgeon in Boca Raton, Florida. Having trained and honed his skills at some of the nations’ most prestigious institutions, his expertise is widely sought after. He believes in serving others and seeing the beauty in all things and brings this passion to his surgical career. He develops personalized treatment plans together with his patients, ensuring that their expectations and desires are met.

WHAT TO EXPECT DURING A BOCA RATON COOLSCULPTING TREATMENT

CoolSculpting uses special applicators to apply the cold to your fat cells. These applicators are placed onto your skin, and you’ll feel a suction sensation as they adhere. When the device starts working, you’ll feel an initial blast of cooling, similar to what you may feel if an ice pack was placed onto the skin. What do you do during your treatment? You don’t have to do a thing. Relax, and our CoolSculpting device will get to work freezing and destroying your unwanted fat.

Our south Florida patients love that this treatment offers impressive results without missed work or downtime. Many patients are back to work the same day with little disruption to daily activities.

You will experience some post-treatment side effects during recovery. These are temporary and usually resolve within several days to a couple of weeks. Side effects after treatment may include:

There are numerous associated benefits with taking your physical appearance into your own hands. Confidence and comfort within yourself are essential to a healthy, enjoyable lifestyle. Change is good, but not necessarily an easy decision to make.

If you are ready to explore changing some aspects of yourself with a trusted plastic surgeon, reach out to us at Farber Plastic Surgery. We can have an informal phone or email discussion, or you can schedule an appointment to meet the team and discuss what comes next for you.

We look forward to hearing from you and helping you become the best version of you that you can be!

CoolSculpting’s results are impressive. Don’t take our word for it. Come in for treatment and see the transformation on your very own waistline. The average patient loses approximately 10-25% of the fat layer in a treated area. For an additional fat loss of up to 25%, a second CoolSculpting treatment can be performed.

Most of our patients find their treatment is highly tolerable. If you’re receiving CoolSculpting, you’ll feel intense cold. The sensation quickly fades to a gentle numbing throughout treatment. Patients report pressure, tingling, tugging, stinging, and suction sensations throughout treatment. Some patients experience mild cramping or a dull ache in the treatment areas.

When Will I See Results?

What Happens if I Gain Weight After Treatment?

To maintain your results, we recommend that patients remain at a stable weight post-treatment. CoolSculpting is an enhancement to the healthy lifestyle you’re already living.

How Many Treatments Will I Need?

Are These Treatments Safe?

CoolSculpting is FDA-cleared and has been demonstrated as safe in many clinical trials. Dr. Farber prioritizes patient safety and only offers treatments that he feels are safe and effective to his patients.

Will I Lose Weight After Treatment?

CoolSculpting is a fat reduction treatment, not a weight loss procedure. We recommend that patients are close to their ideal weight prior to treatment. You may drop pounds, but the real results are seen in the elimination of bulges and rolls.

We understand that some patients are interested in achieving improved aesthetic results through non-invasive and non-surgical options. Today we are able to tighten, slim, and tone with the power of technology. CoolSculpting and CoolTone offer many benefits over traditional weight loss and surgical body contouring procedures like liposuction. Diet and exercise are the hallmarks of a thin, trim body, but all too often, these healthy lifestyle habits aren’t enough to get rid of stubborn fat or build muscle. While diet and exercise shrink fat cells, CoolSculpting works by destroying them. CoolSculpting provides long-lasting fat reduction by 25-30% in targeted areas of the body. It is an ideal solution for your trouble spots, and does not require any downtime or recovery. In addition, CoolTone is a non-surgical treatment that enhances muscle tone. It works by initiating muscle contractions, more frequent and stronger than a naturally-produced muscle contraction, to tighten and build your muscles. Both of these procedures may be the perfect solution for what you are hoping to achieve.

What is the best procedure for stubborn upper arm fat?

Coolsculpting is an excellent non-invasive technique that provides a 30% fat reduction to the treated area. There is no down time. Liposuction provides a greater fat reduction but includes a recovery period of 1-2 weeks. Brachioplasty or “arm lift” may be required if there is loose skin in addition to stubborn fat. A unique treatment plan is designed based on each individual patient’s aesthetic goals.

It is important to schedule a consultation with a board certified plastic surgeon like myself to discuss your aesthetic goals and learn which procedure would be best suited for you. CoolSculpting can be a fantastic option to treat submental fat in the appropriate patient.  Coolsculpting is a nonsurgical body-contouring treatment that freezes small pockets of stubborn fat just under the skin, using a technology called cryolipolysis. The CoolSculpting procedure is FDA-cleared for the treatment of visible fat bulges in the submental (under the chin) and submandibular (under the jawline) areas. Coolsculpting can also lead to a certain degree of skin tightening when performed to the chin area. While diet and exercise shrink fat cells, CoolSculpting works by destroying them. CoolSculpting provides long-lasting fat reduction by 25-30% in targeted areas of the body. Coolsculpting may be an ideal solution for your trouble areas, and does not require any downtime or recovery.

Have you seen more diastasis recti “cured’ by Cooltone?

Diastasis recti is when muscles separate. It usually occurs after pregnancy. As a result of diastasis recti, the stomach protrudes or “pooches”. During an abdominoplasty or tummy tuck, Dr Farber sutures the separatedmuscles back together as an “internal corset”.  Cooltone is a non-invasive technology that can improve rectus diastasis and lead to a strengthened core and more toned and defined abdomen.

The office is impeccable, his staff is beautiful, helpful and very kind. Dr. Farber is a perfectionist. He took his time with me before, during and after my surgery. My stomach is flat my legs look incredible and I feel…
- Dina
Dr. Farber proved to be PERFECT! During my initial consultation, he remained patient, informative, and creative….and it only got BETTER FROM THERE!  I dreamed of breast augmentation my entire life and had been to many consults but never felt comfortable…
- Lisa
My thigh lift turned out even better that I expected and my thighs look better now than they did in my high school cheerleading days 20+ years ago! Dr. Farber and Bianca made the whole experience so comfortable and personable…
- Natalie
Read more

Ready to Book a Consultation?

Fill out the form below to get started.